Answered! Setters are void return type methods. True O False 12. To make fields directly accessible to other classes, the class fields must b….. 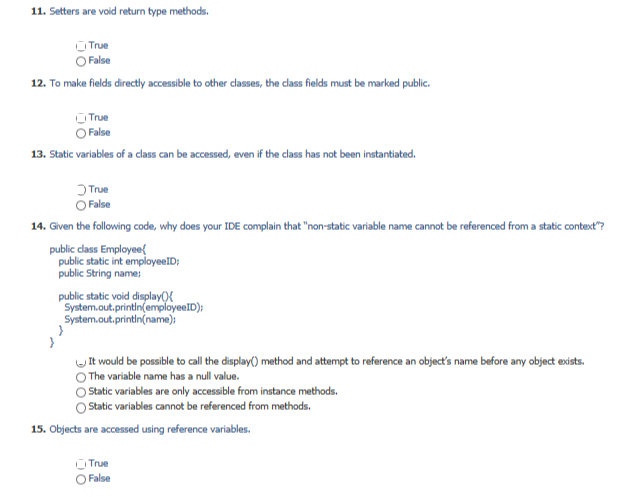 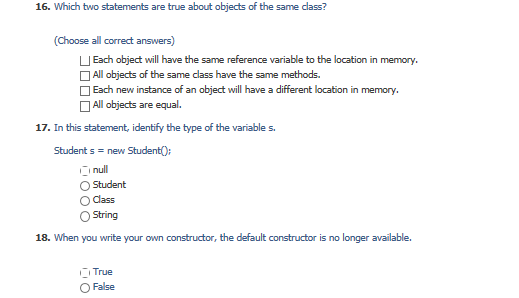 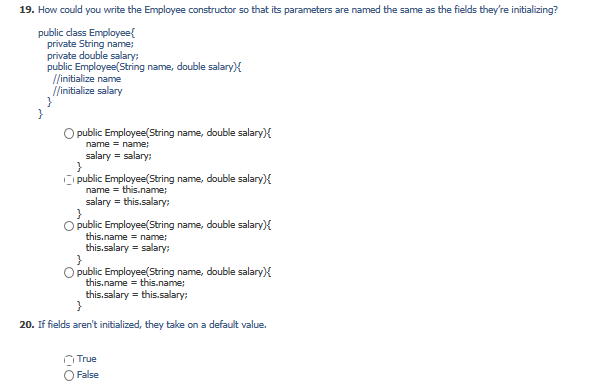 12. To make fields directly accessible to other classes, the class fields must be marked public. True O False

13. Static variables of a class can be accessed, even if the class has not been instantiated. True O False

14. Given the following code, why does your IDE complain that “non-static variable name cannot be referenced from a static context”? public class Employee public String name public static void di public static int employeeID System.out.printin ID); System.out.printin(name) It would be possible to call the display() method and attempt to reference an object’s name before any object exists. 0 The variable name has a null value. O static variables are only accessible from instance methods. O Static variables cannot be referenced from methods.

16. Which two statements are true about objects of the same class?

17. In this statement, identify the type of variable s.

18. When you write you own constructor, the default constructor is no longer available. True O False

19. How could you write the employee constructor so that its parameters are name the same as the fields they are initializing?

20. If fields arent initialized, they take on a default value. True O False

Setters are those methods in the class which are used to set or initialize the class fields. Since they don’t have to return anything, their return type is set to ‘void’.

To use a class field in some other class (in case it is not being inherited), they need to be declared public.

The static members of a class are not bound with an instance of the class but with the class itself. Therefore, they can be accessed using the class name only without instantiating it.